EASEBOURNE – THEN AND NOW

Immediately after the Norman Conquest West Sussex was divided into Rapes and then into Hundreds. Easebourne Village was at the centre of Easebourne Hundred covering an area of some 35 square miles from the Surrey border to the foot of the South Downs. This ancient division remained unchanged until 1844 when Ambersham was separated from Hampshire and the Parish of Steep.

Easebourne is a large parish of nearly 5000 acres with the River Rother as the southern boundary and the Lower Greensand ridge, with the small village of Henley, the northern limit. It is the centre of the large Cowdray Estate with Cowdray House and Cowdray Ruins, the Estate Office, Works Yard and Home Farm all located in Easebourne Parish. The earliest mention of Cowdray appears in 1160 in a reference in a Henry II land agreement with the Fitzsavic brothers.

The most famous building in the village, Cowdray Ruins, was built as a great Tudor mansion with castle features. Started in 1520, it was completed by 1542 but was devastated by fire in 1793. It has not been occupied since. Another of the village’s famous buildings is Easebourne Priory. Built for ten Augustinian canonesses, it was founded before 1238 by the de Bohun family who were from St. Ann’s Hill in nearby Midhurst.

The Ruins of Cowdray, the Priory, the Refectory and Easebourne Parish Church of St. Mary’s are all Grade I buildings in the National Register – a rare number for such a small community. There are also a large number of old houses in the village, mostly of local sandstone and brick. Many farms and geographical features reflect the names of previous villagers: John de Grevette (1288) is the origin of Grevatts; Alice de Holhurst (1296) of Hollist and Walter de la More (1296) of Moor Farm; Gosdens, Kemps, Lockes Lores, Poors and Sowters all have medieval roots. More recently the Easebourne House of Industry (Workhouse) was built in 1792 for Easebourne and surrounding parishes. The Georgian building, known as Budgenor Lodge, was used as a Bible Training Centre before being converted into houses and flats in recent years. 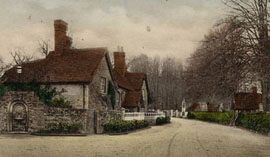 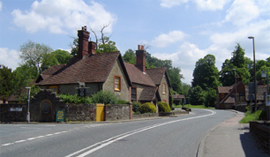 The Easebourne First School was the gift of the 5th Earl of Egmont in 1872 and whilst extended over the years it still retains its original distinctive frontage. Easebourne Primary School recently relocated to the old Intermediate School site in Wheelbarrow castle, while the old building stands empty. Conifers Preparatory School also resides in the village. Our largest building is the former King Edward VII Hospital. Built as a sanatorium above the pine forest in 1903-1906 it is an imposing building by a then very young architect, Charles Holden, who designed many of London’s Underground stations.

Post War community buildings in the village reflect the lack of development space in our neighbouring town of Midhurst as well as perhaps the more attractive settings available in Easebourne. The large School site at Wheelbarrow Castle and the Riverbank Medical Centre at Rotherfield House are such examples.

The information for The History of Easebourne, “Then & Now” was provided by John Stringer.