Opened in September 2018, Easebourne Park lies to the north of Wheelbarrow Castle (although it cannot be seen from the road) and is adjacent to Easebourne CE Primary School.

The Park has 2 main entrances.  The western end can be accessed on foot or by car through the Primary School gates, simply turn into the school drive, continue past the school on your left and into the free public car park. The eastern end can on be accessed on foot from Wheelbarrow Castle, up a set of steps and follow the path until you see a ramp that enters the Park.

Thank You Friends of Easebourne Parish

Picnic in the Park success

A space for all in the heart of the community

Officially opened on September 1st 2018, Easebourne Park is now enjoyed by many, young and old, for play or for relaxation. The Park was designed to blend in with it’s National Park surroundings, with natural oak dens and trails as well as a mix of traditional play.

Since opening, the Parish Council have continued to fund raise and consult with the community on what people want to see added to the space. So far we have added picnic benches, a fully accessible roundabout, an innovative climbing and play area for our youngest visitors and we’ve enhanced the surface of the perimeter path. However, the Parish Council do not intend to stop there. There are plans underway for a multi-purpose covered shelter to be constructed in 2020 and a number of other enhancements are being discussed. We intend to consult with the community again very shortly and as plans develop they will be added to this website.

In November 2019 Easebourne Park proudly received a design award from the South Downs National Park Authority, the first award of it’s kind and the result of a public vote, beating 15 other design projects to the trophy. 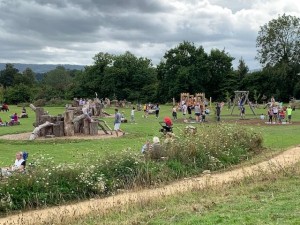 History – With the loss of the former Easebourne play-park imminent, the Parish Council looked for another space to take the place of the play-park.  The Parish Council had ambitious plan though – this space was not just going to be a play-park, but a community space that could be used and enjoyed by the whole community. Accordingly, a 25 year lease (with an option for another 25 years) was signed in Dec 2015 with West Sussex County Council, for a 5 acre former sports field, immediately to the south and east of the Easebourne Primary School car park.

Save for a few dog-walkers, this space had lain unused since 2008. After much consultation, a final plan for the field was decided and fundraising started towards what was to be called simply, Easebourne Park. 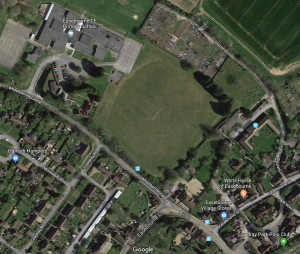 Ariel shot of the 5 acre field, curtesy of Google maps.