Due to the continued worsening of this weekend’s weather forecast,

we have taken the difficult decision to cancel Vélo South.

Whilst Velo South organisers CSM, extol the virtues of the event as economic, charity fund raising, health well being, county profile raising, community financial benefit, it is fair to say that this event has raised much disquiet amongst the communities directly affected by this route (route to be found on the Velo South website). WSCC is to issue Temporary Transport Restriction Orders (TTRO) which will legally close roads that form the route, legally clear any motor vehicles that are parked on the route (with or without the owners permission), and some roads that pass through villages are to be closed for more that 8 hours, although there will be some published route crossing points. These TTRO’s will come into force from midnight on 22/23 September and remain in force until the 15,000 riders pass. Considerable anger was expressed at a recent WSCC/Velo South meeting in Petworth, where the public and many parish councillors and other representatives from parishes and local communities affected by the event gathered to hear from WSCC and Velo South organisers. It was stated by many parish councillors that there had been no prior consultation with affected communities by WSCC before decisions were made to support this event.  Additionally, with just 2 months to go, little effective communication had been received by communities and individuals most affected, from the Velo South organisers, CSM. CSM is a commercial organization, which has Sebastian Coe as Executive Chairman, and states on its website, that it is a “company of entrepreneurs, knowledge seekers and business leaders from across the sport and entertainment industry”. Finally, several business owners present at the aforementioned meeting, to include Cowdray Estates, were worried about the potentially negative effect upon their businesses these road closures would have as movement across the county, and into and out of the communities inside, outside, and on the closed road route, may be severely affected.
Easebourne Parish will be fully enclosed within the Velo South route, although no Parish roads form part of that closed road route. However, if you are thinking of travelling on that day the Parish Council would encourage you to refer to this link: www.velosouth.com/ before making any plans. The Velo South Comms hot-line is 01243 935 359. Any closed road queries could be directed to Velo South on that number or on route@velosouth.com  All 15,000 places on the event have been filled; however, the organisers stated on 26 July at Petworth, that there were a few remaining places available for entries from West Sussex cycling residents.
Finally, travel disruption aside, the event should be an exciting spectacle, with 15,000 cyclists travelling at speed, along closed roads, in the most beautiful part of our county.
Velo South Event – 23rd September 2018Sharon Hurr2018-07-29T09:55:09+01:00

On Sunday September 23, 2018, 15,000 cyclists will start a major new 100 mile closed road amateur cycle event from Goodwood Motor Circuit and will take a route that effectively circumscribes Easebourne Parish and routes out of the parish will be closed for large amounts of time during the day. Please see the poster below. 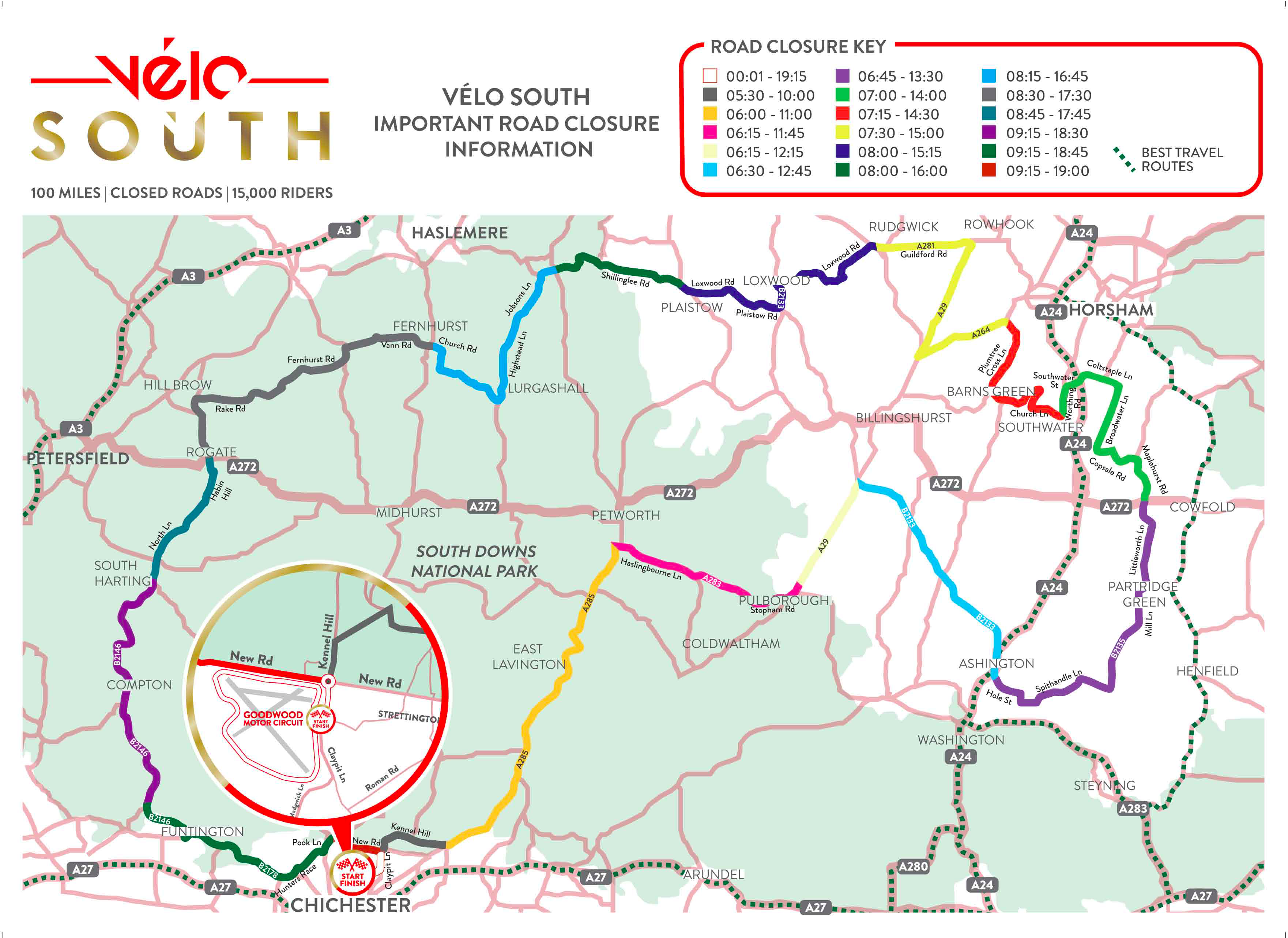 On Sunday September 23, 2018, 15,000 cyclists will start a major new 100 mile closed road amateur cycle event from Goodwood Motor Circuit and will take a route that effectively circumscribes Easebourne Parish and routes out of the parish will be closed for large amounts of time during the day. Please see the route map below, on which are annotated road closure times.

Due to the scale and numbers participating in Velo South, it will be necessary to implement road closures across the full route to facilitate the safe passage of cyclists. The route has been carefully considered and selected through a partnership of all local authorities above Parish level, emergency services and transport operators to minimise the inconvenience of the necessary road closures. Emergency Services will be operating as usual and the public should use normal protocol in the case of an emergency. Velo South will do it we can to provide Easebourne Parish Council with more information on how parishioners can best navigate around the road closures. All Velo South road closure information will be shared with travel information services and satellite navigation providers and this page will be updated with detailed road closure and access maps to support local community access as the event approaches.

This will be a magnificent event to go and watch – viewing points will be advised later, on the Velo South website, but note that the ride will be passing through Fernhurst Town Centre which could be a great spot to watch from, although parking availability in this area may be problematical.

Your Parish needs you!